We chat with Maria Qamar and Hallie Tut about social media, sneakers & the inspirations behind their Nike Air Max 270 art work.

Air Max Day isn’t a ~real~ holiday, but we’ll take any excuse to eat some cake and celebrate shoes. Yesterday, sneaker heads everywhere were stunting on the ‘gram in commemoration of the fictional festivities. It may seem like a strategic marketing ploy to exploit our newfound love for Dad Sneakers, but the holiday has shopping significance — and history! On March 26, 1987, Nike released the original Air Max 1, a silhouette that continues to be regarded as one of the brand’s most iconic models. For the past five years, Nike has been celebrating the birthday of Air with pop-up shops, surprise sneaker drops, limited edition styles and lots of social media coverage.

Heading into the shoe’s 31st year, Nike is paying homage to the next generation of Air: they called upon a group of select young artists to use Air Max 270, the latest innovation in Air sneakers, as their inspiration. At Toronto’s Nike Air Gallery, we caught up with two local female artists to chat about their creations.

Maria Qamar, fondly known to the Internet as @hatecopy, creates cheeky Lichtenstein-esque pop art that explores life as a Desi woman — someone of South Asian decent who lives abroad. (If you don’t know her from social media, you may recognize her work from the walls of Mindy Kaling’s office on The Mindy Project.) Through her Instagram feed and first book, Trust No Aunty, Qamar has created a space for young South Asian girls in the diaspora to talk about their everyday struggles and experiences. She’s speaking to a specific audience, but it’s a conversation others should be paying attention to: “It’s a way to learn about our culture beyond butter chicken and yoga,” the 26-year-old artist says. “It’s a fun way to learn more about us, beyond the stereotypes. When you hear someone having an engaging conversation, you can’t help but wonder what they’re talking about. It’s a good way to inspire curiosity.”

According to Qamar, having a niche art does not prevent massive brands — like Nike, Uniqlo and Saavn — from wanting to work with you. “If anything, it’s the opposite,” she proudly tells me. “People are very intrigued. They’re like: ‘oh my god, we haven’t been talking to brown people. Why not?’ There’s literally a billion of us.”

What’s the first thing that comes to Qamar’s mind when she sees a Nike Air 270? “Drama,” she says in singsongy theatrics. “Which is perfect for me, because drama is all I know.” When it comes to sneakers, we can all relate to the drama illustrates in her art: there’s the struggle of scuffing or creasing your fresh kicks, and the spectacle of being busted for spending all your money on sneakers.

Canadian photographer Hallie Tut is only 18 years old, but she’s already established a stand-out style that has big brands and music stars calling her up. Her lucid, colourful shots are captured with LED lighting, a style that’s often referred to in pop culture as bisexual lighting for its purple, pink and blue colour scheme. With the saturation of artists on social media, this recognizable aesthetic is what sets Tut apart: “It’s so easy to be a photographer on Instagram, and I feel that having my consistent style has kept me identifiable as an artist,” she says. “I think people really like the familiarity of artists that they know have that distinctive style, especially on Instagram where you’re committing to following someone.”

“Toronto is this city that has a very distinctive sound to it,” Tut says passionately when I ask when inspired the photographs. “All of the artists are working together to step into the spotlight, as opposed to L.A. where it’s a competition to get there. In Toronto, there’s this idea of taking the creative people and putting them into a place where they can be seen and embraced by the whole city.”

Nike’s Air Moves Toronto campaign matches this mentality of the city’s thriving youth culture — be it art, music or fashion. “Being a young artist trying to grow in the city,” she says, “that connection was really inspiring.”

There’s one other thing Tut was excited to point out: “I really like how the heel of the Air Max 270 kind of matches the shape of the CN Tower. That really connects the design of the shoe to our city.” 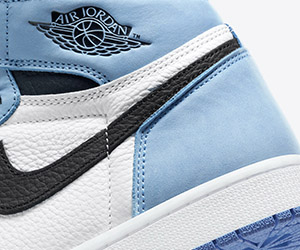